A highlight over the years has been my Presidency with the Quilter’s Guild of Dallas. My one- year term ended at the end of August of 2006. The experience of heading up such an important organization was one filled with more rewards than I could ever express. The responsibility was pretty scary but the pleasure of being selected for the job and the rewards and friendship far exceeded any amount of time and energy that I spent.

The quilt is large (Bob and I slept under it) and is really a two-sided quilt. The front is comprised of many, many blocks made of batik fabrics in a very simple, graphic pattern. It is set in a medallion that is surrounded by many more blocks. The back is made of more blocks and a host of signatures by Guild members and other friends and is put together again in a medallion setting with larger blocks of batik fabrics. It is truly a work of art and the most precious and thoughtful gift I have ever received.

The project was coordinated and the final quilt put together by Judy Kriehn and Marie Zaczkowski and here is the picture of them with their handiwork. It was beautifully quilted by Debbie Tribble. 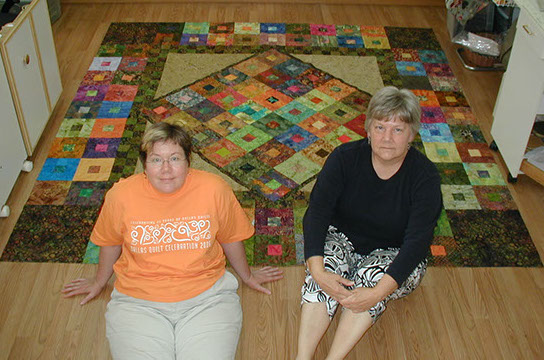