About the loss of Beverly…

It is hard to say how important my quilt making life was to me during the illness and death of my sister.  I would come home from her house and just lose myself in my studio. During those months I was mostly working on two quilts that were both completed a short time before she died. One was Kaleidostar, and it was a happy quilt. It was the last quilt of mine that I showed her. The other quilt was Stages, and I could not bear to show her that one. I call it my grief quilt. It was a hand-quilted and stitched, mostly whole cloth quilt made from fabrics that I had hand-dyed. In the last weeks of her life I would come home and just sit and stitch with not much of a plan and as I stitched a face appeared and I highlighted that face and called it Grief. My head and heart worked through much of that process while I worked on this piece.

The following are some things I wrote after my sister, Beverly, died in 1999. First is the addition to my standard Artist Statement and describes the events leading up to an exhibition that I was working on at the time she died and was dedicated to her memory.

The second is a statement that I wrote and was read by the minister at the end of her service.  That service was very inspirational with five women giving eulogies that spoke to different facets of Beverly’s life as a woman, lawyer, judge, mother, daughter, sister, aunt, patient, social worker, and friend.

included as part of Artist Statement at

Within weeks of making arrangements to produce this exhibition, a family crisis arose that has tested every fiber of my being.

For nearly all of the year and a half I prepared for this show, my younger sister, Beverly was battling melanoma and fighting for her life. Working on the quilts for this exhibition truly saved my life, or so it seemed. It was something to focus on, to redirect feelings, and the process became therapy. It was something tangible to cling to while Beverly’s life slipped away like smoke through our fingers.

The work became my life preserver, the diversion I so needed. This exhibition was a gift and came to me at the intersection between life and death, at the Crossroads.

From an early age, Beverly displayed the traits we all have loved about her… a sense of humor, honesty, loyalty, kindness and thoughtfulness.

After high school in Arizona, Beverly migrated to Texas to attend Abilene Christian University. Always full of hope and idealism, she stayed in Abilene after graduation and became a social worker.

After a few years of social work, she felt a need to take her advocacy for kids to another level and decided to go to law school. Beverly loved kids! 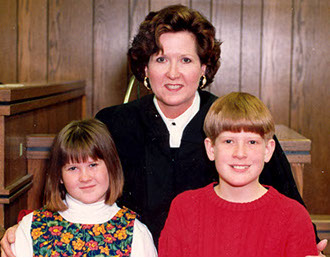 Beverly met her true love, Bobby in law school and they were married after graduation. She became an assistant District Attorney in Wichita Falls, Texas, and later found her way to the District Attorney’s office in Tarrant County in the Crimes Against Children Unit. In the Tarrant County CPS office she was known for holding the record for the fastest return of a favorable jury verdict… 20 minutes.

In 1993, Beverly was diagnosed with malignant melanoma in the form of a small mole on her lower leg. After surgery we were all hopeful for a complete recovery.

In 1995 she became the Associate Judge of the 325th Family Court. Chosen over 30 applicants, her expertise in family dynamics and children’s issues made her perfect for the job.

In the fall of 1997, the cancer returned and we learned shortly thereafter that it had spread to her brain and spine.

It was an incredible experience to have a little sister that thought you were wonderful. She was such a big fan; always wanting to see my work, and was with me and so proud while I worked on pieces for this exhibition. She wanted to know my progress daily.

So many of us were lucky to have had Beverly in their lives. She was such an inspiration to her family and friends and when Judge Judith Wells spoke at her memorial service, she said that hundreds of children were benefited by Beverly’s service, and that the children of Texas have lost one of their most dedicated advocates.

This exhibition is dedicated to the memory of Beverly Oliver Forshey, a person that truly made a difference. 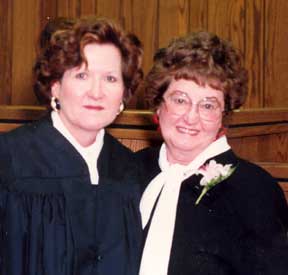 Beverly (left) with our Mom, Frances Oliver, on the day that she was sworn in as Associate Judge of the 325th Family Court 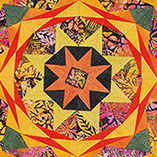 Beverly with her kids,
Rob and Claire