For almost 40 years, Bob was part of my life. When we married we had both been married before and each of us had two children, he had two boys and I had two girls… the kids were young. I think we both knew there would be challenges to blend the families but we forged ahead. My daughters were with us full time and Bob’s boys came on the weekends, summer vacations and time on other holidays. They were with their mom most of the time. When Bob or I met people and was asked if we had kids, Bob’s answer was “we have two step kids and two regular kids”… people would usually get a funny look on their face and occasionally someone would ask what a regular kid was. My answer was we had two full-time and two part-time kids.

Blending was not without some issues and turmoil from time to time as my daughters did not remember having a man in the house, much less a man that told them what to do. What was with that, they wondered… but we forged ahead. We made a family, we built a house that would be our home for 30+ years and had so much fun. Most all of our years were great with some sad events that families experience thrown in, but through thick and thin we were great friends.

Not long after we were married, I fell into quilt making, and that changed many things in our lives in a very positive way. New friends came along and it was something we both enjoyed being part of.  Bob was absolutely my biggest fan. He loved what I was doing.

An important thing happened for Bob during those years—he discovered collecting wine. My brother-in-law got him interested, and before we all knew it, wine became a passion for Bob.  He was the kind of guy that jumped in with both feet. He studied, collected and sought out information wherever he could. One day he had bought the biggest purchase to date, and he was excited but a little remorseful at the same time. He wistfully said “I don’t care if I ever drink it, I just want to have it”… to which I said “that is how I feel about my fabric stash.” He said he never understood that before… it was one of those aha moments. We both understood the passion of the other, and needless to say, never a word was said about each other’s acquisitions. Another perk was the new friends that came along with the wine collecting and it was good to see there was crossover in the groups. 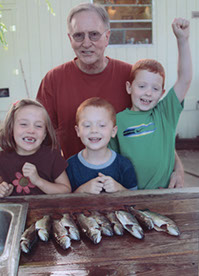 The kids grew up… started multiplying. Time passed so quickly, Bob retired, my quilt making continued, we traveled, collected lots of art, wine and did lots of fun things.  Along the way, Bob’s health presented some challenges, but for the most part we enjoyed the good life. In the summer and fall of 2014 we began to see the beginning of the end. It was gut wrenching to watch this great guy decline at a steady pace, and there was little we could do. The doctors tried many things and when it all ended on January 27, 2015, we knew we had done all we could. Bob was a fighter. He did not want to go… it was all left on the field. He wanted a little more time with the grandkids. He was always thinking about the family.

No matter what, when we went through good times and rough patches—all families have them—Bob always had your back. He was loyal and generous. He could be really tough, and if he did not like something you knew about it and he was usually right in his assessment of most situations. If the kids needed something he was there. He loved our family and friends, and through many blending situations there came to be a whole lot of family and lots of friends. During those last weeks and months, Bob and I talked many times about what a good life we had and how lucky we were. We laughed and cried and did much reflecting. He knew he was loved and nothing was left unsaid… we were lucky that way.

A friend told me one time that sometimes it was easier to leave than be left. I have an empty place in my heart, but have decades of great memories. That will have to do for now.  I will forge ahead.