30 years ago when Bob and I married, I soon discovered the amazing extended Hartman family. Of course the two step sons, Chris and Greg were expected and we had already developed a relationship. Bob also has a younger brother, Hob, his wife Cathy and their daughter Leslie, in addition to his stepsister, Mary, her husband Ron and their kids, Robbie and Lisa. The extra bonus was being in the family and really gaining them as new and wonderful friends.

During my lifetime, I have been influenced by a number of people in different ways. One was an old man that I knew 40 years ago in my hometown that opened my eyes to the real world and shaped many of my political views. The extended Hartman/Garcia family has had the same effect on my development as an artist. Long before I was making quilts, I had an interest in art and dabbled in a few art and craft projects. I knew I like abstract and modern as opposed to the traditional and realistic art usually seen in museums. 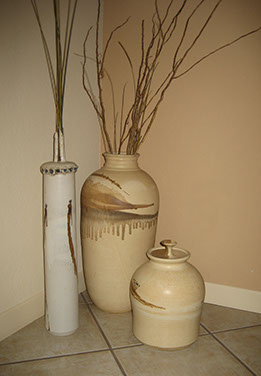 Bob’s brother Hob (known as Walter professionally) was a potter supporting his family along with the help of his weaver wife Cathy. They went to highly regarded arts and crafts shows as a family and when their daughter started school, Cathy cut back on her weaving and stayed home with Leslie and took on the business end. When I first started quilt making, they were very supportive and enthusiastic about my new found interest. Because their work was the sole support of their family, they worked together and while they were both artists, they also were living off their art so it was also a business. When Cathy took over the business end and most of the household duties Hob/Walter became the main wage earner. It is very difficult to make a living from your art and a lesson I learned very early on in my “art” career is what dedication it takes to make it work. While it would be fun to turn out lots of unique pieces and be always pushing your medium, to make a living you must create and cater to your market. In Hob’s case, he did high-end arts and crafts shows/festivals for over 25 years. When not traveling to shows, he was in the studio creating work for the next one. Hob and Cathy were one of the first I was aware of to create a computer mailing list for customers in each town that Hob would travel to and were very astute business wise as to the power of the repeat customer. While they were able to achieve financial independence doing art and being self-employed, there was little time for dabbling and as time went on, Hob’s work evolved with new glazes, shapes and added products and the constant was producing well crafted and functional items. 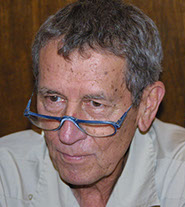 Another very influential person has been Ron Garcia, the husband of Bob’s stepsister, Mary. Ron is a painter, sculptor, house designer/builder to mention only a few of his talents. He holds a PHD in Art but prefers to not to be addressed as Doctor. Before I was even involved in the art world in any way, the subject of art was common at family gatherings since both Ron and Hob were artists. For a short period of time Ron had taught art in a University and had strong views about the value of an art education. He knew that far more were being graduated from colleges around the country with art degrees and that there would not be career opportunities for the majority of them so he questioned the practicality of the degrees and how prepared they would be. He was also quite knowledgeable about how the “fine art” world worked and to be really successful, you must learn to play the game. Much of it, like singers/actors and other performing artists, it is being in the right place at the right time. Another element is being connected and willing to be “owned” by the gallery owners and art consultants. There is a side to the art business that is very fickle and greatly influenced by a few and they will control the direction of your work if allowed to. Ron has always stayed true to himself as an artist. While many artists are recognized by a particular theme style and continue to do that for a whole career, Ron is ever changing and growing as an artist. To make a living, he has had a number of other careers and has approached each one of them the same way as his art: true to himself and true to the task at hand.

One important thing that has resonated with me during my journey as an artist is true of both Hob/Walter and Ron. They both find an important part of their art is craftsmanship and presentation. They both are adamant about their work being finely crafted. Hob wants to produce pieces that are well styled and functional and will perform as expected. Ron has always worked in many different styles and is as adept at realism as extremely abstract and avant-guard, but the craftsmanship and presentation are paramount. In a world where instant gratification is the rule and attention to detail is not always embraced, the influence by these two gifted individuals will always be with me.

Of course I must stress that the women behind both of these guys cannot be overlooked. The sisters in law are both so important to me. Cathy began a second career in academia after their daughter, Leslie, was raised and that has afforded Hob the opportunity to be “off the road” and pursue other options. She has developed important programs in Library Science at UNT. She travels the world promoting her work. Mary is an amazing human being and I cannot say enough about her as a mom, wife, and friend. She has started quilting and since retirement, she and Ron are spending much time in Colorado enjoying life. Of course Ron is working too hard and Mary is watching after him. These are two wonderful women that just blow me away.

Yes, this extended family was the unexpected bonus for joining this family. My life has been enriched by them more than I could ever say.

Pottery made by Bob's brother, Hob